Georgia McCurdy of Five Star Staging (FL) took a home that needed to display a functional office area and created it in this bedroom nook. An abundance of clutter and too much art made the room feel cramped and disorganized. Simple decluttering and the removal of excess furniture immediately made the space feel larger. By rearranging art and adding some accessories (borrowed from another room), this space now appears both attractive and functional.

If you’d like to expand your knowledge about home staging ,check out the Staging Diva Ultimate Design Guide: Home Staging Tips, Tricks and Floor Plans.

While I’m showing Georgia’s work, I also want to tell you a bit about her. A graduate of the U.S. Air Force Academy, this mother of two also served as an Air Force Officer prior to a career in healthcare.

As a military spouse she has traveled the country staging and selling homes of various sizes and styles, a great preparation for her new career as a home stager.
Many military spouses take the Staging Diva Program because the portability of a staging career makes it ideal for anyone who has to pick up and move to different cities. It’s also a natural fit because as a military spouse you already have connections to a community of people who also have to move around a lot!

In fact, I was featured in a 2007 issue of USAA Magazine (which goes out to all military families) in an article called, “Showtime!” which highlighted the importance of decorating a house to sell before putting it on the market.

While some of my readers may still believe that home staging is a totally new concept, it really isn’t and has been proven for many years in both slow and fast real estate markets. 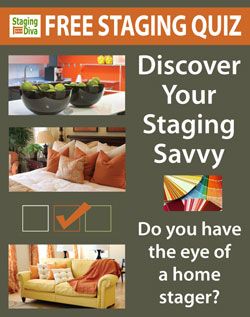 Do you have natural staging talent?

Find out with this Free Quiz! No obligation.

PLUS: Get a FREE invitation to meet The Staging Diva in a live conference call!